•  Eskom is at least 15 years away from instituting inflation-cost tariff increases, as the power utility says it needs 16% increases for the next five years, followed by a similar period of 20% increases with a final five years of 9% increases.

•  In the interim, however, a framework for the introduction of a carbon tax was announced in the 2012 Budget Speech together with the proposal that a carbon tax be implemented in 2013/2014 at a rate of R120 per ton of carbon tax equivalent (CO2e) on direct emissions.

A carbon tax as being proposed by National Treasury will wreak havoc on the South Africa economy and will make it uncompetitive. Per the Budget documentation a rate of R120 per tonne of carbon dioxide (CO2) emissions is suggested as a carbon tax. A tax free threshold of at least 60% will apply.

At the current rate Eskom will pay R11 billion per annum when the carbon tax is implemented, with escalations of 10% until 2020.

The above number does not take into account the implicit carbon tax already built into the electricity price for renewal energies and energy efficiency incentives administered by Eskom for which the country is already paying. Eskom in terms of its current pricing model will pass the additional tax onto consumers and thereby increase the price of electricity even further. 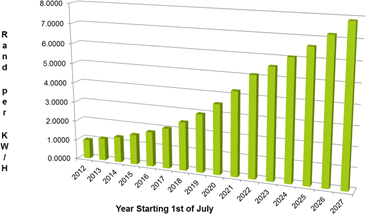 What does the system consist of:

Inverter:
Mounting frame for flat or pitched roofs as well as open space.

Technical data and performance of the 154 x 240W panel kit over life span:

•  NASA average hours of sunshine per day over a period of 365 days for Bloemfontein = 6.05 hours

•  Performance is based over a period of 30 years with a ave. decline in efficiency of 0.778% per year on the panels

•  Re-payment period of the investment is ± 5 years 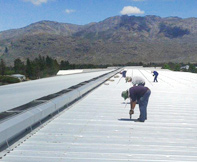